An E-Commerce software application from Storilabs based on cloud technology, which aims to fulfill purchase requirements of customers. It can be integrated with major E-Commerce companies like Shopify, AliExpress, Oberlo, etc. which are termed as sales channels. OMS is also combined with delivery channels like DHL, dpd, onfleet, FedEx, etc., which helps in completing the purchase.

“Manually executing the large number of test cases possessed by Storilabs during regression testing associated with each release of a new feature or a release following a feature/functionality update was a major concern faced by Storilabs.”

“Storilabs approached Testvox for a consultation and decided to adhere to our plans to get relieved from their concern.”

“Storilabs still wanted an improvement in the time taken for the entire release cycle. They entrusted this requirement also with Testvox to get it addressed as soon as possible.”

1. For the first challenge, we devised a plan of automating all the test cases that they executed frequently for every regression associated with each release of a new feature or a feature/functionality update.

“Storilabs got convinced about the power of automation as the time taken for regression testing associated with each release got reduced from few days to very few hours thus improving the QA cycle to a good extent.”

2. To alleviate the second challenge, we devised a plan of integrating the automated scripts with their development pipeline.

“The existing functionalities or features are tested at the software development phase itself in the pipeline without any intervention from the software testers or QA personnel and the bugs found are immediately reported.”
“The software developers will get an intimation and can rectify all the issues identified before the release regarding a new feature or a feature/functionality update is made. “

“This method of integrating the execution of our automation suites with their software development pipeline paved the way for speeding up the entire release cycle considerably.”

This application software is currently used by customers in real time.

The below image signifies the token of appreciation received by Testvox from Storilabs. 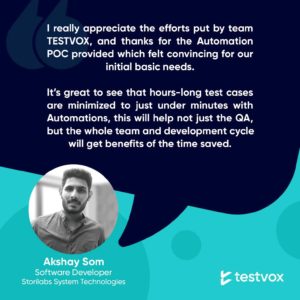