Performance Testing of a bidding application by Testvox for Weblanza

About the client — Weblanza is an IT firm specialized primarily in Web and Mobile Apps Development. They does software development for companies located mainly in the Middle East.

Performance testing was the solution identified to deal with these issues.

“These challenges persuaded Weblanza to identify a company with a strong potential to execute performance testing to get rid of these difficulties. Testvox was reached out for aid by them after a thorough search and filter process.”

Weblanza was to manage 5000 bidders using this application software simultaneously without any concerns. Another requirement was to facilitate the achievement of 9500 transactions per hour successfully.

We tested initially for 500 users simultaneously and then proceeded testing with 1000 to 2000 users when the initial evaluation was found to be impeccable. The application started displaying errors 30 minutes after the ramped up strength of 2000 users started using it. The reasons for the aforementioned challenges were identified using specific methods.

We then increased the number of users up to 5000 and informed Weblanza regarding further issues identified on analysing the server statistics. After the final rectification, the application was found to be working fine with good server stability for 5000 users.

Our workload modelling and scripting was planned to make possible
i. 9500 transactions per hour, and
ii. To manage 5000 simultaneous users smoothly.

“A recommendation to monitor the server carefully when the number of users increased beyond 2000 was conveyed even though the response time for each user was fine. “

We also monitored the CPU utilization, Network and memory usage whenever the performance testing was conducted.

The CPU utilization was found to be below 20-25% throughout the test and the memory and network related parameters were within acceptable limits.

“No abnormalities or failures or unexpected issues were observed during the test.”

The software application from Weblanza for bidding through the web is live now and working fine. The client “Qatar government authority” for which this application software was developed is successfully using it to facilitate online bidding.

“The application is currently able to handle a load of 9500 TPH and 5000 real time users with an acceptable response time for each user.”

Even though it was a tight schedule for us to work with this project as we were given only 2 weeks of time to complete both scripting and testing, we were able to deliver it within the stipulated time frame. We completed the entire test scripting/ code designing, execution, analysis and getting the issues fixed within 2 weeks of time.

CPU utilization graph and network graph as present in the generated report are shown below. 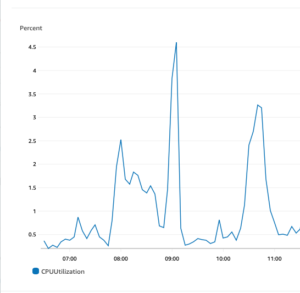 The below image signifies the token of appreciation received by Testvox from Weblanza. 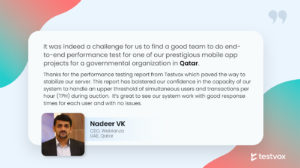