What is Automation Testing and How Does It Work?

Automation testing is a software testing technique that compares the actual outcome of a web or mobile application to the intended outcome for the end user. This can be accomplished by developing test scripts or by using any automation testing tool. Test automation is used to automate repetitive processes and other testing operations that are difficult to accomplish manually.

There are hundreds of Automation Testing Tools out there and each one has a specific quality to it. But not every tool can serve each and every and hence, here is our comprehensive list of automation testing tools. These tools are the most efficient and compatible in the industry, focused on easy usability.

When it comes to Automation Testing Tools, Selenium is the best automation testing tool for all kinds of web applications. It can run on a wide range of browsers and operating systems. Moreover, it works with a variety of programming languages as well as automation testing frameworks.
Selenium can be used to create extremely well-built browser-centred automation test scripts that are scalable across multiple settings. Selenium can also be used to build scripts for rapid bug reproduction, regression testing, and exploratory testing.
Selenium is an open-source tool. Here are all the Selenium downloads. To know more about Selenium click here.

The Appium test automation framework was created with mobile app testing in mind. The great thing about this tool is that it is fully free and open-source. It allows you to automate native, hybrid, and mobile web apps for iOS and Android. Appium is a client/server architecture that uses automation frameworks provided by vendors. Appium is easy to install and use. It has become one of the most popular and stable mobile automated testing solutions over the last few years.
All the resources from Appium are here. If you want to know how to install Appium, click here.

TestComplete is the most widely used automated testing application for desktop, mobile, and web. With TestComplete, you can write and run functional UI tests utilising powerful record and replay capabilities or scripting in languages like Python, JavaScript, VBScript, and others.
TestComplete supports a wide range of applications, including web, native, hybrid, and cross-browser apps for iOS and Android, as well as regression, parallel, and cross-browser testing. For complete coverage and improved software quality, you may expand your tests across 1500+ real test environments.
Here is a list of resources from TestComplete. You can start a 30-day free trial of TestComplete here.

ACCELQ is the only cloud-based, codeless test automation solution for API and web testing, allowing businesses to accomplish continuous testing.

Among the highlights are:

Katalon Studio is a test automation solution with API, Web, Desktop, and Mobile testing capabilities. It has a wide range of features, including the ability to track actions, construct test cases, generate test scripts, run tests, report results, and interface with a variety of other tools at various stages of the software development lifecycle. Katalon Studio is a cross-platform programme that runs on Windows, Mac OS X, and Linux. It also allows you to test iOS and Android apps, as well as Web applications and API services in all modern browsers. Katalon Studio integrates with a number of different applications, including JIRA, qTest, Kobiton, Git, Slack, and others.

How to choose the best one out of the many Automation Testing Tools for you? 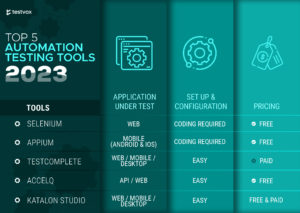 It is important to choose the best Automation Testing Tool for your particular needs since not every tool will serve your purpose and sometimes even the best tools will lack some specific requirement that you have. Therefore consider the following steps to analyse and then proceed with choosing from out automation testing tools list:

We have a variety of Automation Testing Tools accessible for various sorts of testing. Some of these tools are available for free, while others require a license to use. Yes, the tool you use will always be influenced by your needs, but we hope the list of test automation tools presented above will help you make that decision.