Functional Testing, its types and its automation process

What is Functional Testing? 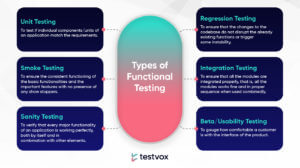 1.Unit Testing: This is performed by developers who write scripts that test if individual components/units of an application match the requirements. This usually involves writing tests that call the methods in each unit and validate them when they return values that match the requirements.
In unit testing, code coverage is mandatory. Ensure that test cases exist to cover the following:

2. Smoke Testing: This is done after the release of each build to ensure that software stability is intact and not facing any anomalies. Smoke testing ensures the appropriate and consistent functioning of the basic functionalities and the important features. This also ascertains the absence of show stopper bugs in the release done. The decision on proceeding with further testing is made based on the outcome of smoke testing. Ensure basic functionality/user journey works and there are no show stopper bugs present.

3. Sanity Testing: Usually done after smoke testing, this is run to verify that every major functionality of an application is working perfectly, both by itself and in combination with other elements. Sanity testing is a subset of regression testing. This also checks the proper working of new functionality added to an application.

4. Regression Testing: This test ensures that changes to the codebase (new code, debugging strategies, etc.) do not disrupt the already existing functions or trigger some instability. Complete end to end functionality of the application software once the new feature or change has been included in it gets tested here.

5. Integration Testing: Once regression testing is done on individual modules of the application software, integration testing ensures that all the modules are integrated properly, that is, all the modules work fine and in proper sequence when used combinedly without breaking the product. If a system requires multiple functional modules to work effectively, integration testing is done to ensure that individual modules work as expected when operating in combination with each other. It validates that the end-to-end outcome of the system meets these necessary standards.

6. Beta/ Usability Testing: In this stage, volunteers or a limited set of users for whom the new feature or changes made in the application software have been enabled for usage will test the product in a production environment. This stage is necessary to gauge how comfortable a customer is with the interface. Their feedback is taken for implementing further improvements to the code.

Generally, functional testing in detail follows the steps below:

Automation can certainly reduce time, effort and cost involved in executing functional tests. Initially, Return on Investments is higher. Once we get better coverage it will drastically reduce the manual efforts and produce highly accurate results in less amount of time. Human error can also be minimized, preventing bugs from slipping past the test phase based on the automation coverage.
However, increased automation means that QAs need to develop test cases for each test. Naturally, formulating the right test case is pivotal, along with identifying the right automation tool for the purpose.

What to look for in the right automation tool?

1.The tool should support all the modes(web or UI or mobile or all) and functionality (if any complex UI patterns are involved) of the product.

2.The tool must be easy to use, especially for all members of your QA team.

3.It must be seamlessly operational across different environments.

a. For example, ask yourself: Can you create test scripts on one OS and run them on another? Do you need UI automation, CLI automation, mobile app automation, or all of them?

4.It must provide features specific to your team’s requirements.

a. For instance, if certain team members are not comfortable with a certain scripting language, the tool should support conversion to other script languages that they may be better versed in. Similarly, if you need specific reporting and logging or automated build tests, the tool must be able to provide the same.5.In case of changes to the UI, the tool must support the reusability of test cases.

1.Pick the right test cases: It is important to intelligently select the test cases that you will automate.. Automate the following kinds of tests:
a. Tests that need to run repeatedly/frequently.
b. Same tests with different data.
c. P1, P2 test cases which consume much time and effort.
d. Tests that are prone to human error.
e .Same tests in different OS, browsers, devices, etc.
2.Dedicated Automation Team: Automation requires time, effort and most importantly, a certain measure of specialized knowledge and skill-set. Not every member of your QA might be good at writing automation scripts or know how to handle automation tools. Before deploying automated tests, analyze the various skill and experience levels of your QAs. It is best to allocate automation tasks to those who are equipped to accomplish them.
3.Data-Driven Tests: Automated test cases that require multiple data sets should be written in such a way that they are reusable. For this, the data can be written in sources such as XML/JSON files, text or property files or read from a database. Creating a structure for automation data makes the framework easier to maintain. It also enables more effective usage of existing test scripts.
4.Be on the lookout for breaks in tests: Your test cases and chosen automation tool must adapt to potential UI changes. Take an example in which an earlier version of Selenium used a location to identify page elements. Now, if the UI changes and those elements are no longer at those locations, it can lead to test failures across the board. Thus, consider writing test cases that enact minimal change in the event of UI changes.
5.Test frequently: Prepare a basic automation test bucket, and strategize for frequent execution of this bucket. With this, QAs can enhance the test automation framework to make it more robust. Needless to say, this practice also helps to identify more bugs.